…being wildly applauded in this photo of opening night. Lest we forget, it was The Old Man who directed the very first production of P&B. (Oh, he never let me forget it.) That’s him behind Gershwin in the goggle glasses. 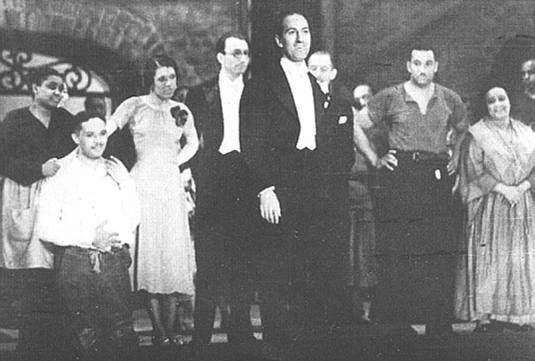 Of Porgy and Bess’s premiere, composer-critic Virgil Thomson wrote: “Gershwin’s lack of understanding of all the major problems of form, of continuity, and of serious or direct expression is not surprising in view of the impurity of his musical sources and his frank acceptance of the same. The material is straight from the melting pot. At best it is a piquant but highly unsavory stirring-up together of Israel, Africa and the Gaelic Isles… I do not like fake folklore, nor bittersweet harmony, nor six-part choruses, nor fidgety accompaniments, nor gefilte-fish orchestration.” The 1934 production ran for 124 performances–for opera, a huge success, but by Broadway standards, a flop.

3 thoughts on “Rouben Mamoulian, George Gershwin and the Cast of Porgy and Bess: The Full 1942 Album”