There must be 17 people in the entire world for whom this book has any relevance. I am not one of them.

I, however, have fallen hopelessly in love with an English, middle-ranking orchestra conductor, and this book was on his Facebook Likes List, and since nowadays I will follow (almost) anywhere my beloved John Wilson leads me, here we are. Why else would I not only purchase, but listen to, 58 Fanfares Played by the Onyx Brass and Geraldo’s Greatest Dance Hits—which nonetheless I have come to adore?

What the argument of the esteemed late fictional dirigent, Barrington Orwell speaking through his still-living amanuensis, Lev Parikian—son of the noted violinist Manoung Parikian—seems to be is that the career of an orchestral conductor is not a happy one. It is of course a hazardous profession, notorious for causing insanity, emotional instability, ruined health and, in at least one case I read about in Slipped Disc—when a woman in Brighton rushed the stage during a performance of Rodgers & Hammerstein and stabbed the conductor with a no. 2 Dixon-Ticonderoga shrieking, “You have desecrated the music of my people!”—homicide. But Orwell, or Sir Barry if you prefer, so reverences the lofty position he himself holds that he places the blame for dirigental woes everywhere but on the dirigent himself: on the uncooperative/disrespectful weather; or concertmaster; or soloist; or composer; or entire orchestra—choose one. Or all. I’m surprised he didn’t bring up Bernstein vs the BBCSO, but maybe the English were right on that one.

Unfortunately, in no way has this slight volume helped me better grasp the mind of my beloved, although it managed to identify his type. When not on the podium he wears neither Armani nor Hugo Boss but rather attires himself in jeans, trainers, horn-rimmed glasses and, because of his preternaturally long arms, blue bespoke shirts. I think he’s about 11 stone. Apparently off the podium he’s a combination of The Scholar and Mister Shouty-Scary. On the podium, in full formal dress, he is a god. 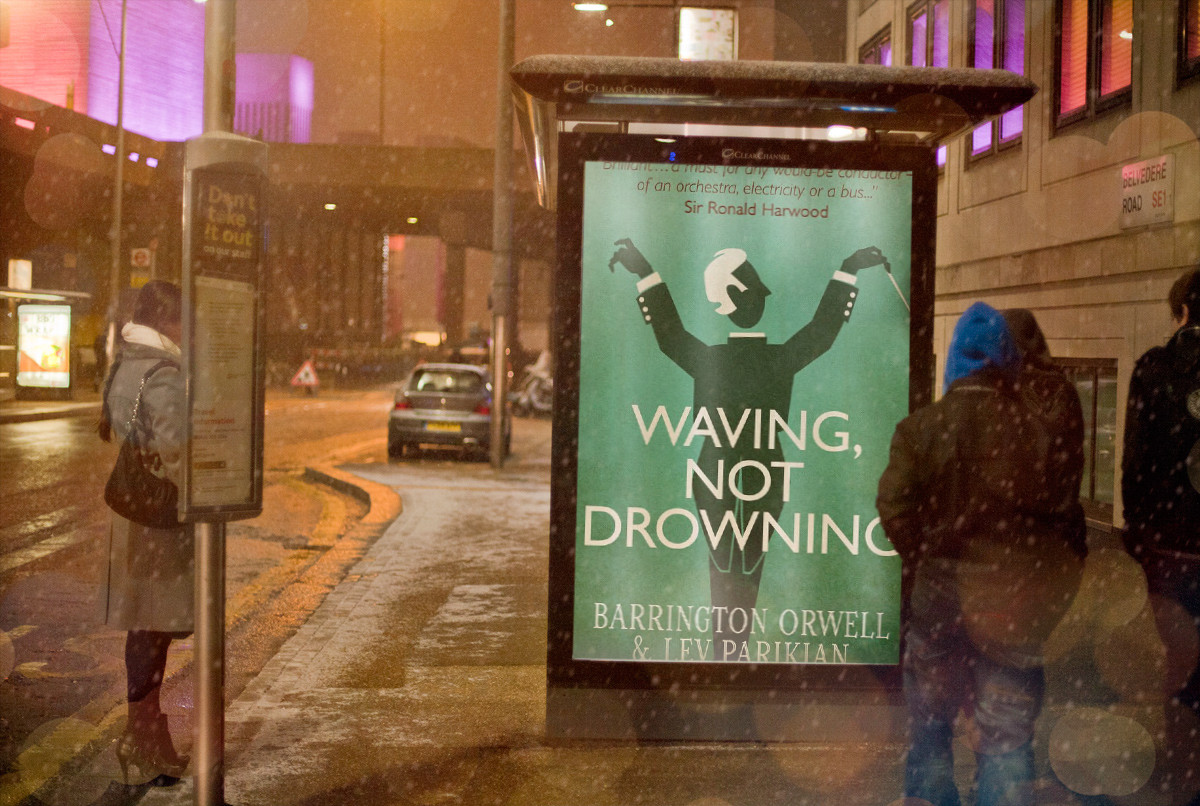 Find my review on Amazon here

Which brings me to the theory of which I am the author: The conductor exists not for the orchestra, not for the composer living or dead (Good grief! Whoever had that idea?), but for the audience. Whether from a box at the opera or from the floor at the Royal Albert, the conductor is the friend, philosopher and guide we require and as such (except for that dishy second-desk violinist with the golden locks) ought to be our sole focus. Yes, it is a weighty role that demands an enormous amount of conviction and honest purpose in those foolhardy enough to accept it. But remember that it is We, the People, aka The Audience, who ultimately hold a conductor’s success or failure in our own sweaty hands.

7 thoughts on “My Amazon Review of Waving, Not Drowning by “Barrington Orwell” and Lev Parikian”