During a live-to-streaming broadcast, bonny John was kind enough to share his thoughts about the foremost 20th century composer of English Light Music, Eric Coates (1886 – 1957): 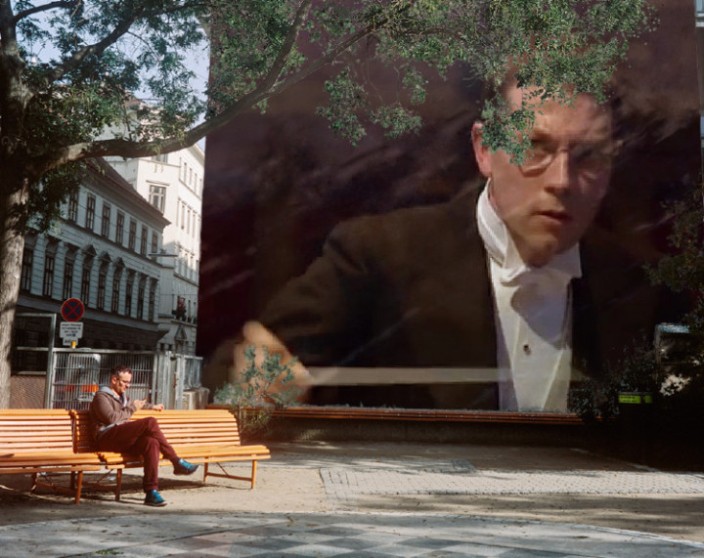 John was all of 26 when he first conducted a recording of “The Enchanted Garden” with the BBC Concert Orchestra in 1998 for Chandos.

ON COATES’S PLACE IN ENGLISH MUSIC

“Well you know, people often say that there’s nobody between Purcell and Elgar, there’s this three-hundred-year sort of gap when we were a land without music—but there was this one composer of genius and significance between that…1870s…which is Sullivan, and it was Sullivan who was sort of the founding father of what we might call, uh, Light Music in England with his “Overture di Ballo”, and that’s aside from his partnership with Gilbert. After Sullivan you had Edward German, and by the time you get to his successor, Eric Coates, the new medium of broadcasting means that this school of me-tic-ulously crafted, uh, pieces for orchestra has a, has a much wider listenership… So I don’t think it’s farfetched to say that Coates was one of the very first composers to be made by the new medium of broadcasting. And between 1906 and 1957 when he died he had this fifty-year career, that’s five decades, um, in which he was very single-minded in his ambitions to write beautifully-crafted, um, easygoing pieces for orchestra. … He’s one of the most meticulous craftsman of all and, uh, you know, he famously met Maurice Ravel in 1925, they had lunch at the Ritz to swap ideas on orchestration, which is (exhales short laugh) quite something.”

“He had a, a small child, Austin, uh, born in 1922, and he was forever haranguing him to set his favorite, uh, bedtime stories to music, so that’s where “The Selfish Giant” [slurred], which is the first, then “The Three Bears” and then in 1930 “Cinderella” originated. And they’re perfect, um, little vehicles, for sort of miniature orchestral tone-poems, and several of them were later turned into ballets and staged.” …

“I think, um, it was the perfect form for a composer who didn’t want to venture into symphonies. You know, just as as the suite is the perfect kind of miniature form of a symphony, so these nursery, uh, these fairy tales were the sort of tone-poems in miniature, ideally suited to Coates’s talent.”

ON COATES’S “THE SELFISH GIANT”

“Um, I think the most significant thing in this piece is the newly-found use of syncopation in the orchestra, and it caused quite a stir in 1925 or wherever [sic] it was written, ‘cause it was the first kind of fusion of, uh, syncopated jazz rhythms… I mean, harmless now when you hear them, but caused sort of semi-scandalous [sic] at the time, and people were writing to the newspaper saying, We must ban jazz, you know, morally disintegrating and all of that… [fades]”

“There’s a contractual side of Coates’s life, because he was very early on given a, a long-term contract with Chappell’s, the publisher, with whom he remained for most of his life, and that contract stipulated that he had to write one extended work, and three short wor—two short works—and three songs every year. And that’s basically all he did. For fifty years. He never stepped outside the terms of his contract, and I think he had trouble getting down to composition, it was, he was always, I remember his son Austin, whom I knew very well, telling me he was always just happy to be fiddling around with his camera and, and his hobbies and things like that, you know, composing was always something had to sort of apply himself to rather reluctantly.”

“He, as I say, all of these new sort of fo-forms of media, the 78 record and then later the long-playing record… You see that—you see the appearance of each new sort of, uh, (clears throat) form of recording being mirrored in the, in the sort of, the timings of Coates’s piece. So when you get th’—when Decca bring out the, the long-playing FFRR recording process y-you see that the ‘Four Centuries’ Suite ju-just tailored to those kinds of processes and lens(?) So yes, he always had his eye on, on, on how to disseminate his, his music [fades].”

ON COATES’S “VALSE-ROMANCE” AND “LAZY NIGHT”

“We-ll yeah, I mean, you know, they’re so transparently scored, these pieces, no, there’s nev—nothing ever unnecessarily doubled, everything’s carefully calculated, i-it’s like, you know, any of those Rossini or Mozart or Schubert, but one person sort of slightly off-center and it tells, so there’s nowhere to hide, it’s one of these… [fades]”

“Yup, bigger orchestra, I think it’s his longest single movement, twenty minutes, and, um, I guess he was at the peak of his powers, you know, he was a, he was re(?) master of the orchestra by, by this stage, so for he, for him, he wanted the use of the more exotic instruments, such as the bass clarinet…cor anglais…which don’t really appear in many of his other pieces because he was a, you know, he used to write for the, the salon orchestras of the day and the seaside orchestras and light orchestras… Again, rise in gramophone records, you know, all those, uh, freelance orchestras which could be assembled at a minute’s notice to, to make records, he did a lot of that. …

“Household name by 1933 with the, with the ‘London’ Suite, twenty thousand letters to the BBC, and they had to have a, a constable standing outside the door of their flat to, uh, to, ‘cause there were so many, sort of, autograph hunters and what-have-you. … They were always moving house, you know. His wife used go to the estate agents, like most people go to the supermarket, and she was always picking out… [fades] Poor old Eric was always being dragged from, from one place to th’— She was always dreaming up scenarios for Mrs Coates, and I think she wrote the scenario for this ballet. Several of his other sort of, uh, ballets were, were, were to stories by his beloved wife, and, uh, they made very effective stage pieces as you can hear, ‘cause he, he had a sort of, eh, eh, good dramatic instinct, you know, lots of colorful, eh, fantasy episodes in a piece like this.”

ON COATES AND THE MUSICAL THEATER

“He dabbled with theater, he wrote three musicals which were never, uh, completed, although with all the songs are written [sic], but the books weren’t…um…finished. And, uh, you know, one wonders why he never quite sort of, um, made his name in the theater, ‘cause he certainly had the melodic gifts, you know, to rival Ivor Novello and Noel Coward and Vivian Ellis and all those people of the, of the period. But his greatest need, musically, was the, was the, was the sound of the, the orchestra, yeah, yeah, that’s why he put pen to paper, and the idea of writing a musical and someone else doing the orchestration, that never quite fired his imagination enough, I don’t think.”

“…No, it’s ‘The Four Centuries’ Suite, that’s where he’s at his most dazzling, which you can hear on Volume IV…(pause, audience laughs)…whenever that may be.”

“…The highest composer [sic] in England I think, making three hundred quid a week in the 1930s, not bad.” …

“He was, he was a viola player, and, ah, he was principal viola of the Queen’s Hall Orchestra and he was, ah, longing to give up the viola ‘cause he said it was too heavy and (audience laughs), and, and he had this great big, you know, seventeen-inch viola, and he said it used to give him arm ache, and he’s longing to give it up, and so he decided to do that. Well, he didn’t decide that, he got the sack, for sending too many deputies. To rehearsals. (audience laughs) Henry Wood gave him the sack. And so his hand was forced and he became a composer, a full-timer [sic] of necessity. Ah, but I think it was this piece that sort of consolidated his position.”

“I think, you know, Coates, eh, really never wanted reality to, sort of, um, come into-to his musical world, they were always il-lu-sory picture postcard pieces d-designed to sort of transport the listener. Um, even i-in his London suites, you know, he picks the posh bits. There are no tenements (audience laughs) glimpsed in any of his London music. And I think, ahoh, this is the closest I feel to a sort of tinge of regret. Melancholy in the last movement. It has, it has, it has a faint aura of sadness, I-I’d say.”

5 thoughts on “John Wilson Conducts the BBC Philharmonic in Eric Coates’s “The Enchanted Garden” and Other of His Works, 13 November 2019, MediaCityUK, Salford”