My beloved John conducted the National Youth Orchestra of Great Britain (who The Guardian described as “a fearless young army on the move”) in “The Pines of Rome” by Respighi in Leeds in 2015; and in Glasgow, where he’s been the Associate Guest Conductor for several years, with the BBC Scottish Symphony Orchestra in 2018. Now he’s rounding out his association with this perennial orchestra piece with a wonderfully crisp and sparkling new recording from Chandos with the new Sinfonia of London.

I classify this under My First Music because I first heard this symphonic poem in a broadcast of a Young People’s Concert. Leonard Bernstein conducted, the NY Philharmonic played. Listen for the feet of Roman soldiers along the Appian Road, my affectionately-remembered rabbi of music suggested. I think I was 11. 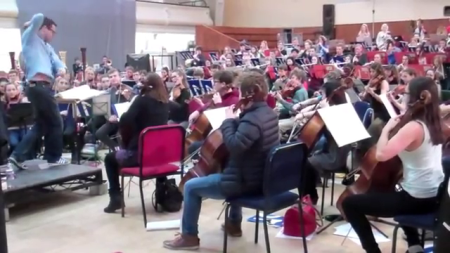 NOTES for “Respighi: Rome” on Chandos available here. John rehearsing the NYOGB in The Appian Road, summer 2015. Above John: The Villa Borghese.