Above: The full audio of Johnny Mathis’s 1958 hit*. And here’s Leroy Anderson’s original 1948 concert version, played by the Calgary Symphony and conducted by Karl Hirzer. Courtesy of adam28xx.

Another weekend doddle before we celebrate the Fourth (Yanks 1-Brits 0). (Updated October 2021)

*I am astonished that John actually, correctly, described Teddy Wilson as a Swing musician rather than put him into the catchall Jazz bag, which I’d have expected him to do, considering who was his teacher. His teacher was Richard Rodney Bennett. My teacher (at CUNY) was YUSEF LATEEF (download his 1957 album Jazz Mood here in full).

**John, are you conflating song with melody, or what? Only asking as a humble member of your audience.

There were some particularly strong singers in the BBC Proms concert at the Royal Albert back in 2011 I take pleasure in remembering, on this gray Monday two days before The Inauguration. On va voir. “Serenade” from The Student Prince was one of my mother’s favorite numbers, she just thrilled to it, especially when Mario Lanza was singing. “Can’t Help Singing” was in my Deanna Durbin Songbook when I was a teenager. “The Man That Got Away” was sung at my friend’s funeral—the friend who left me all his Andre Previn records—by his grieving lover. And then there’s “Secret Love”. 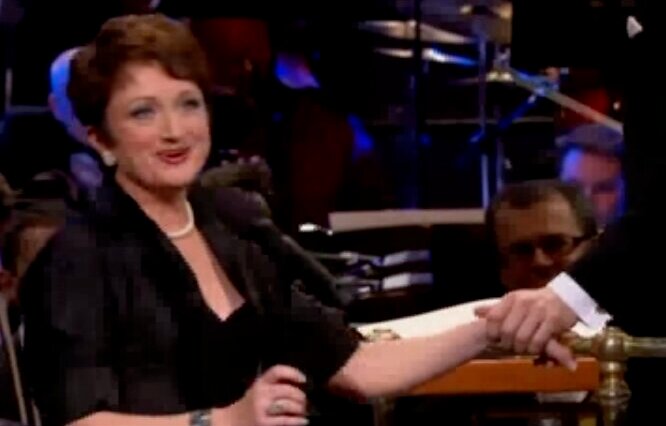 John you cad, we all witnessed this nifty bit of scene-building. But I already knew anyway, that’s where your true love lies now and forever.

Disappointing to hear that John won’t be doing Britten’s The Turn of the Screw at Wilton’s Music Hall in London this month. So, to cheer everybody up, here’s the full 2-hour program of my John and The John Wilson Orchestra at the Proms, 2013. That’s Jane Monheit, John, and Matt Ford below.

DAMN! UPDATE 16 JAN 21: Both DailyMotion and BiliBili have DELETED this video of the complete 2013 BBC concert! If I find it again I’ll reinstate the link. (Links to selections available on YT are in red.)

As a compensation, here are ALL the other, complete JOHN WILSON AT THE BBC PROMS available on my blog:

Well, John, this isn’t a Joan Crawford movie so there’s no gold cigarette case but as I’m still in love with you and want to give you nice things, I’ll give you my honest appraisals, which is something I’ve been doing all along anyway (I hope you’ll agree) and not throwing myself into the Atlantic Ocean for your sake. So let’s do this organized, going down the numbers in the program one by one because, as you recall, I used to work at ASCAP:

By the way, John, glad you shaved this year. Will catch up with you in Nottingham with Vaughan Williams…

An incredibly hot, hot sexy song, and incredible that Day’s own son Terry Melcher (the Manson Family’s original target) co-wrote it for her. If this doesn’t get you hankering for the one person you want to go to bed with, you’re just not paying attention.

You wouldn’t look at him to think that Levant, the eternal loafer/boy genius, was a fine tunesmith as well, would you? But here’s his plaintive standard sung by one of the most identifiable singers in American music. From After Midnight, Capitol Records.

Between 2000 and 2005 John recorded 8 albums for the venerable jazz/swing/dance band label Vocalion. Whereas four months ago I had none, I now have 6 of them. I have that awful Orchestral Jazz he did with Richard Rodney Bennett; his 2 albums of Angela Morley’s work; his Paul Weston and his Geraldo (see “Geraldo Among the Filipinos, 1963”); and I just ordered Dance Date.

There are two other albums I haven’t gotten yet: One is with a pleasant but unimaginative crooner named Gary Williams (who I suspect was the chap who enabled John to increase the size of his orchestra—“He just turned up one day at my door with a pot of money and said, ‘Will you put together a great big orchestra for me to sing to?’ And that was the start of it,” said my blinky winsome John in a 2011 interview at the BFI) but it doesn’t sound interesting enough to drop fifteen bucks on.

But this one, Lessons In Love, sounds perfectly gorgeous, the little I heard—it’s classic Songbook stuff—and I’m dying to have it. It’s Lance Ellington’s strong clear vocals and fundamental John Wilson Orchestra through and through. Trouble is, it apparently went through a limited pressing so available copies run from 115 American bucks upward. How can a record only 13 years old be a collector’s item already??

Lance Ellington (listen to his “It Don’t Mean a Thing If it Ain’t Got That Swing” from the show Ellington Sings Ellington) is the son of English bandleader/singer Ray (no relation to Duke) Ellington, who I know only as that weird singer on The Goon Show who mangled my favorite Charles Trenet song, “Boum”, even though I yelled at him through the computer screen not to do it. Lance is great, though. He teamed up with John and Orchestra for their 2014 Cole Porter album doing the song “Now You Has Jazz” and that album won the Echo Klassik Music Without Borders Prize. (My beloved’s big smile at 4:23.) 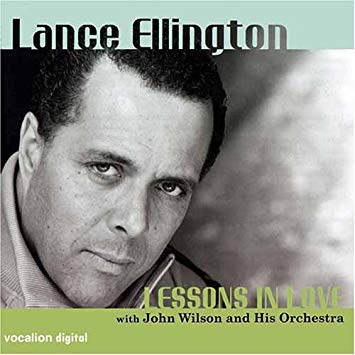 But before Seven of Nine on Star Trek: Voyager, the real Sinatra made a big hit of this tune. 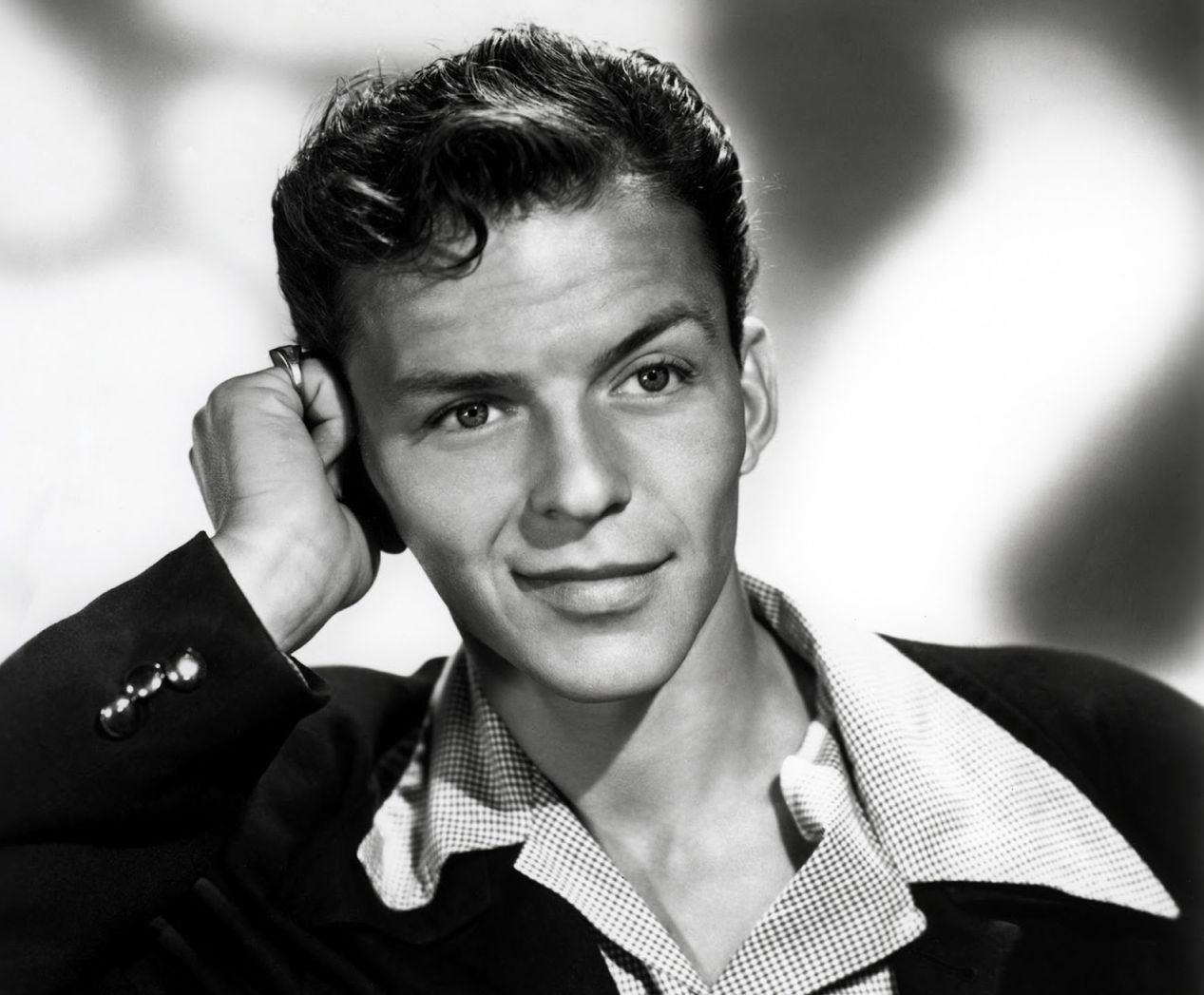 Could you say no to this boy? Above Frankie, his hit: “It Can’t Be Wrong” by Max Steiner (after Now, Voyager), lyrics by Kim Gannon.

Fast forward through World War II to Al Williams’ Papagayo Room in the Fairmont Hotel. It’s 2 a.m. Al’s place is the hangout on the late shift. Mexican food in the middle of the night? We were young and indestructible. Frank was on his own now and headlining at (again) the Golden Gate. The critics weren’t impressed with “Frankie,” as they called him, to his disgust, but the schoolgirls were cutting classes to catch his shows and I was giving him sincere plugs. At the Papagayo Room on his closing night, a burly broken-nosed guy in a polo coat came to my table and said, “You Caen?” When I nodded warily, he slipped me a small package, said, “Frank says t’anks” and disappeared. The package contained a solid gold Dunhill lighter. It was the first but not the last time I would be reminded of Sinatra’s penchant for extravagant gifts…

I’m a pot of joy for a hungry boy,
Baby, I’m cookin’ with gas.
Oh, I’m a gumdrop,
A sweet lollipop,
A brook trout right out of the brook,
And what’s more, baby, I can cook!

The Queen of Broadway Bernadette Peters entices conductor John Mauceri with her many, many assets, courtesy of Leonard Bernstein and the great lyric team of Adolph Green and Betty Comden. “I Can Cook, Too” from On the Town. Fun starts here at 4:45.

Above Peters and Mauceri: Nancy Walker from the original Broadway cast sings this showstopping number.

Not my favorite version of all the R&H Cinderellas (this is my favorite version—I mean come on, it’s Julie Andrews) but this one boasts, as I mentioned, the gorgeous pinoy Paolo Montalban singing “The Sweetest Sounds” from No Strings as well as the Queen of Broadway, Bernadette Peters, singing great another interpolated Rodgers song, “Falling in Love with Love“. Nifty score arrangement by Doug Besterman.

Fellow Minnesotan Clara Edwards (1880-1974) began her career as a composer and songwriter in the 1920s, joining the American Society of Composers, Authors and Publishers (ASCAP) in 1925. Edwards composed over 100 works and published over 60 songs. Her songs were “quickly taken up by publishers” (her words), and many famous singers performed them, including soprano Lily Pons and baritone Ezio Pinza. Her most successful song was “With the Wind and the Rain In Your Hair”, with lyrics by Jack Lawrence.

“Long Ago and Far Away” is a popular song from the Columbia Pictures 1944 Technicolor film musical Cover Girl starring Rita Hayworth and Gene Kelly. The music was written by Jerome Kern and the lyrics were written by Ira Gershwin. Along with the Blane/Martin Judy classic “The Trolley Song”, “Long Ago…” was nominated for the Academy Award for Best Original Song in 1944 but both lost out to Bing Crosby’s hit “Swinging on a Star”. Sixty years later it finished #92 in AFI’s 100 Years…100 Songs survey of top tunes in American cinema.

This is the song that clinched for me that solfeggist job at ASCAP.