At the Royal Concert Hall, Nottingham, 23 January 2014 with the City of Birmingham Symphony Orchestra. 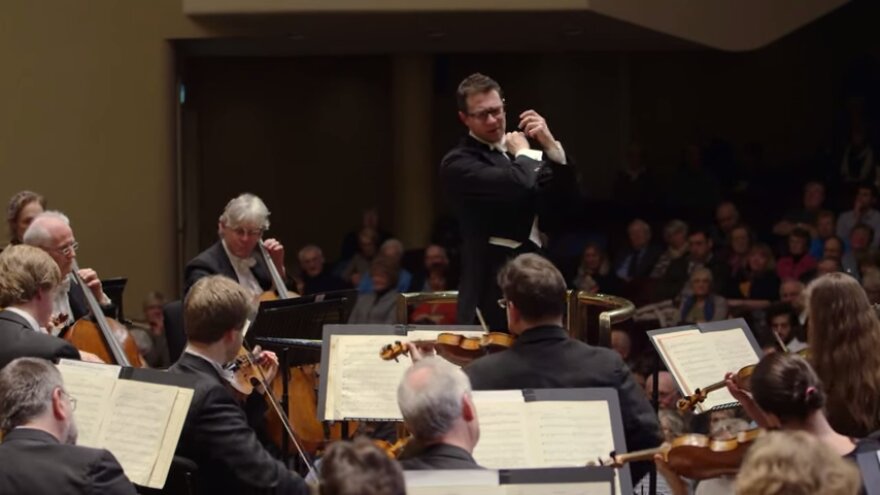 Above my beloved John conducting this emotion wringer of a symphony: Barbirolli’s landmark 1958 recording with his own Manchester-based orchestra, The Hallé.

Great to see my bonny back in the saddle, beard and all. This is the first concert of a series of 3 by the Philharmonia which was underwritten by a private family trust and partnered with Classic-FM, but it wouldn’t hurt to throw them a few extra dollars around this time. 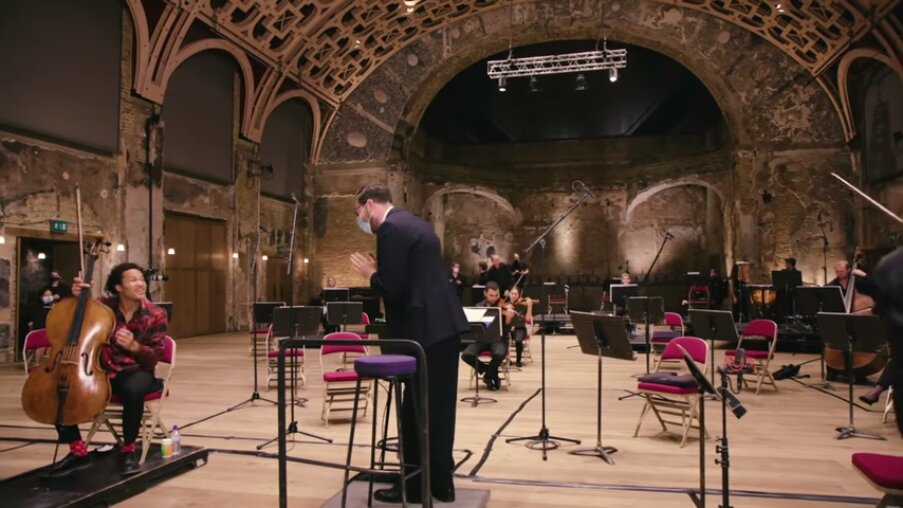 Above the Great Hall at the Battersea Arts Centre, July 2020: The complete audio recording of this concert.

John’s last appearance before an orchestra was at the Royal Festival Hall back on 27 February,  when he conducted Samuel Barber’s Essay No 1, along with Korngold’s Violin Concerto in D Major and Elgar’s Sketches for Symphony No 3.

Sorry for my shaky handwriting but while listening to this I had a fantasy that gave me the giggles: John being interviewed by my favorite ohne palones, Julian and Sandy. (This more-than-usual musical episode of Kenneth Horne’s 1967 radio show also includes Rambling Syd Rumpo, the Fraser Hayes 4 singing off-key not on purpose, and the screamingly funny takeoff skit, “Young Horne with a Man”.)

In this very-recently posted pod chat with London-based culture maven Edward Seckerson, John talks about his idol, conductor Sir John Barbirolli; von Karajan; Leonard Bernstein; French romantic music of the early 20th century; conducting Massenet at Glyndebourne; reviving the Sinfonia of London; winning that BBC thingie for his Korngold Symphony (and confirming what I surmised in my review re his “austere” sound vs “chocolate sauce”); his other Korngold recording, the violin concerto, also with son vieil ami Andrew Haveron; Richard Rodney Bennett‘s compositional journey of self-discovery; and what we’re all waiting for, what’s up with The John Wilson Orchestra (seems like that psychic flash I had back in April has proven true).

Here are the main points I took away from this podcast: “What I do try to do as a conductor is carry my sound around with me… It’s almost—I don’t really feel comfortable talking about because you know music is basically a doing thing and not a talking thing… My deepest musical creed is wrapped up with how an orchestra sounds…” Which pretty much confirms what I’ve suspected these two years about him.

John, light of my life, fire of my loins, I respect your process. 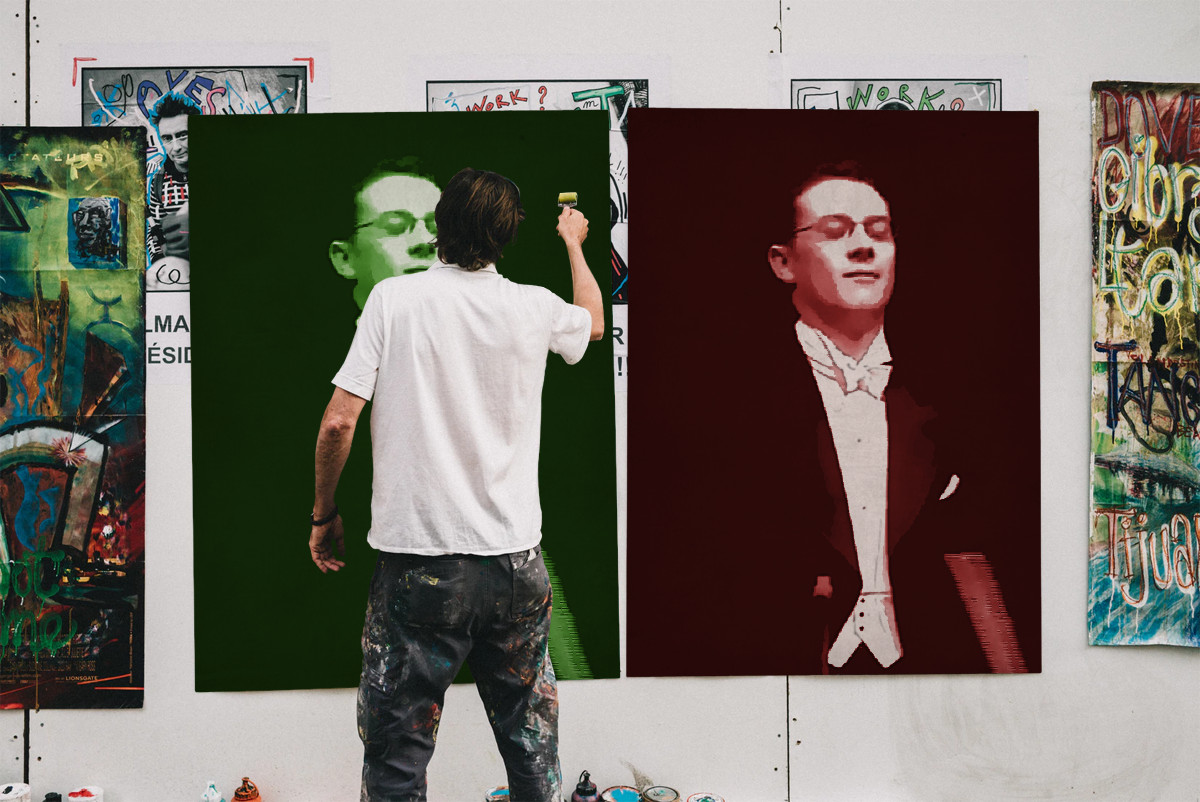 Above: John’s 44-minute podcast interview. Below, “Greensleeves” as we’ve all heard it on Monty Python.

23 JUNE UPDATE: Here’s Barbirolli again from that same album conducting Ralph Vaughan Williams’s Fantasia from a Theme by Thomas Tallis, which my beloved John Wilson will be conducting The Phiharmonia Orchestra in, in an online concert on 17 July.

Back in 2018 John conducted Symphonies 1 and 2; in 2019 he did the 3rd, the 4th, and the tranquil 5th, and this year, 2020, on 15 January, he’ll be conducting Vaughan Williams’s fairly atypical 6th with the BBC Philharmonic (in a program that includes “In the Fen Country”, also by Vaughan Williams) in Nottingham (according to his management website; the BBC says it’s Salford).

This is the first truly important piece of the year for my beloved conductor. I’m listening right now to Roger Norrington and the San Francisco Symphony perform it, trying to discern the tricky bits John might find challenging. 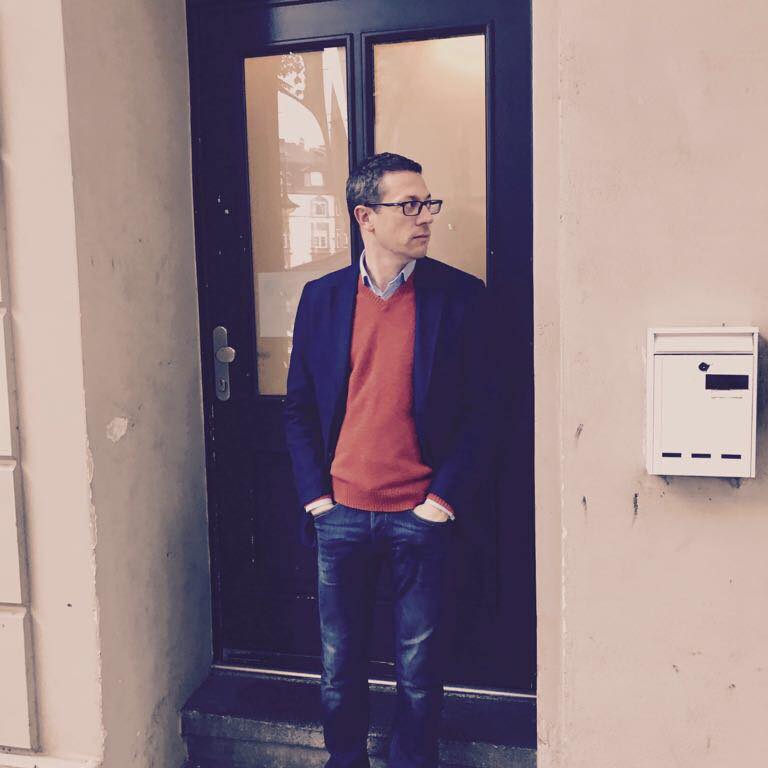 Above the picture of John I stole from him: Norrington and the San Francisco Symphony Orchestra play the enire Symphony No 6, 1997. Roger Norrington is the conductor who believes in using no vibrato. “Wobble” he calls it.

But just so you don’t go on thinking this is some kind of fanblog (really, I’m not a fan*, just crazy in love with the bloke below) I thought I’d spend a posting to tell you all how I got my first gig in pictures. 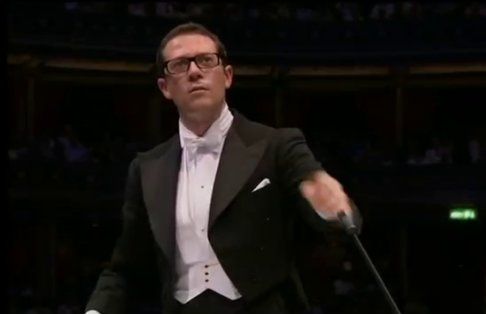 So anyway. One lovely summer evening about six weeks after I hit the city I went with a (legit) actress friend to a house party up on Potrero Hill, mostly because she enticed me with the information that the party would be featuring a hot tub. (Am such a pushover for hot tubs.) Well, at the party there was this cute but obvious older guy from London (trimmed ginger beard, open shirt, bead bracelet—no one goes California like the English) named Paul, who owned the house and who invited me seulement for a session of coke+quaaludes and a nice soak later, after all the other guests have left. Then he gave me his card. (This was only the second time a man ever gave me his business card before we had sex, and it wouldn’t be the last)…

*No, really, I’m in love with John but he plows through Gershwin like a bull moose and treats Bernstein like Bernstein’s Saruman and he’s Frodo. How could any red-blooded American woman countenance such effrontery to her national pride?**

**He does, however, conduct Elgar and Vaughan Williams like an angel.

This is the group my beloved John Wilson wished a happy birthday to, and it’s a truly worthwhile one: The Royal Northern Sinfonia has an outstanding record in community outreach in the northeast of England. Plus they play from an exquisitely good repertoire. It’s pleasing to think of my John with musical memories like these. I hope he gets as much pleasure from them as I do, remembering the Minnesota Orchestra when I was a teenager during the Vietnam War era. 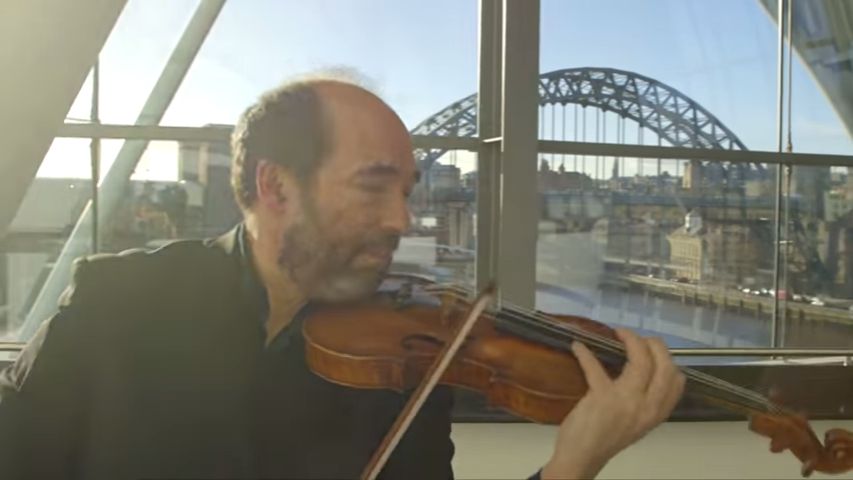 Bradley Creswick at the upstairs hall at The Sage, the Royal Northern Sinfonia’s permanent home in Gateshead, on the south side of the river from Newcastle. That’s the Tyne and the Tyne Bridge out the window.

The vid here (screenshot above) doesn’t have the entire Vaughan Williams, so here’s my Tyneside lad conducting this exquisite piece: 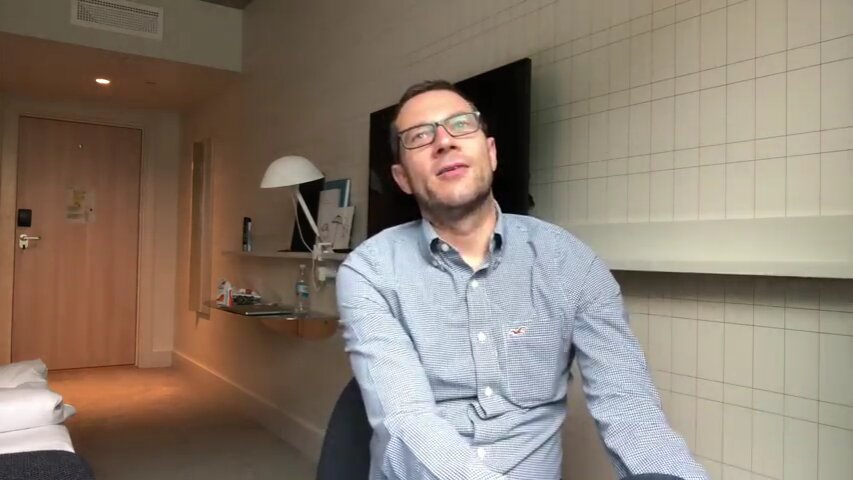 Oh John honey. You’re a sweetheart to do this when you’ve barely unpacked.

John conducted Ralph Vaughan Williams’s Symphony No 5 in D major with the Royal Northern Sinfonia at The Sage in his home town of Gateshead 1 March 2019.

I’m still finding it mighty strange that John was born on the same day as my father’s final birthday, in 1972—on the 25th of May, which would make them both Geminis—but somehow it starts to make sense: There’s John of the BBC and Eric Coates and Ralph Vaughan Williams and the tra-la-boomy-boom that makes up English music; and then there’s John of the big-shouldered swaggering sweating bombastic vibrant American tune book. One (when he plays it well) makes me want to cook him a nice lamb stew with pearl onions swimming in the rich gravy; the other (again, when he plays it well, which is almost always) makes me want to—well, I was in The Business, you know, use your imagination. 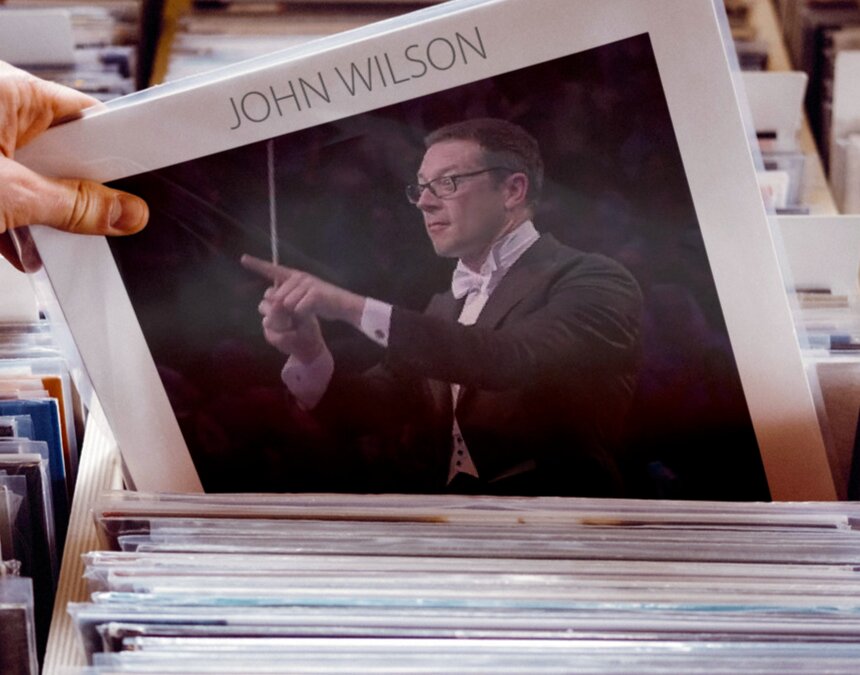 Low Fell Lad Makes Good. Above: the Arlen-Kohler standard “Get Happy” was was written for Ruth Etting but popularized by Judy Garland in the film, Summer Stock (MGM, 1951).

Only don’t be too sure which is which. Like I said, John almost always plays the music of his own country and heritage well, with a deep feeling that’s irresistible; whereas when he works out the great American tunes it turns out more often to be hit-and-miss, with many many many more misses than hits.

But oh! When he does hit!

When bonny John and his orchestra play “Get Happy” or “The Trolley Song” or “June Is Bustin’ Out All Over” or the MGM Jubilee Overture—or the absolute best of the lot, “Slaughter On Tenth Avenue“—it’s total heaven, and I’m not the only one to say this. Subtlety is not this lad’s forte when it comes to the American popular repertoire. But when John goes big, bright, busy and loud when the number actually calls for it, screams out for it, it’s so damn satisfying when he does it and does it brilliantly that I want to—how can I put this?—do something for my darling in gratitude…make him a nice meal…fatten him up a little… (Ess, kind, ess!)

For right now, though, I’ll settle for a natter on a quiet afternoon, rather not in London, maybe when you get up to Gateshead again, back to The Angel of the North…

This recording was made off-air by a sound engineer using state-of-the-art recording equipment for the time that used rare and expensive long-playing acetate disks. The symphony was first performed in June 1943 (at the height of the blitz) but this recording captures a later performance in September 1952. There are four movements: Preludio 0:00 Scherzo 11:40 Romanza 16:40 Passacaglia 26:42. 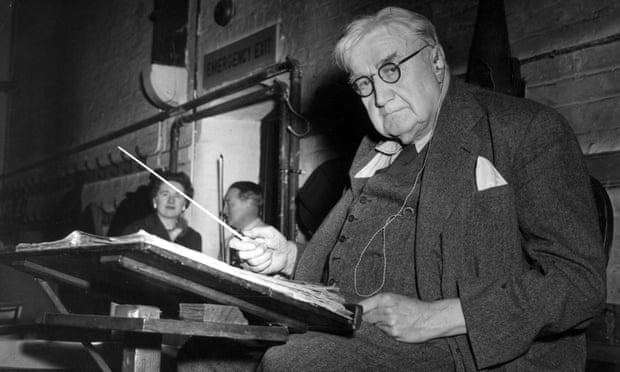 My beloved John Wilson conducted this symphony with the Royal Northern Sinfonia at The Sage in his home town of Gateshead in March 2019.

My beloved John Wilson’s very first time on the podium in the Royal Albert was not with his eponymous orchestra—that was in 2009—but, at age 35, conducting the 50-piece BBC Concert Orchestra in their program, “British Film Music” (entire program available here in 14 parts). First up is William Walton‘s* score from the unseemly gorgeous (all blue skies and puffy white clouds) 1969 war picture Battle of Britain. “Battle in the Air” (in part 1 @1:20) is spirited, ravishing and very dramatic. I saw the film first-run back home in Minneapolis, then again a few years later in London and then again in, of all places, Patras, Greece, but it’s the music I remember most. 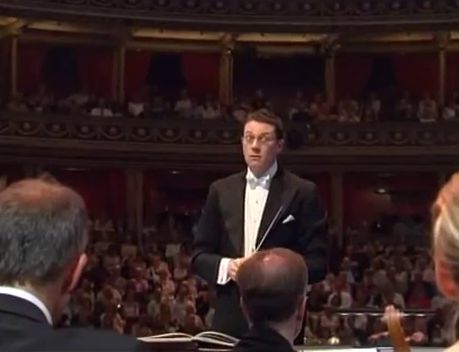 Yes love, that overtone did seem to go on forever, didn’t it?

** Because of his advanced age, Sir William Walton turned to friend Sir Malcolm Arnold for assistance with the orchestrations (which Arnold supplied, as well as writing additional cues). Harry Saltzman rejected the score, saying it wasn’t long enough. Ron Goodwin (who composed for Where Eagles Dare) wrote the replacement score, but Sir Laurence Olivier threatened to have his name removed in the credits if none of Walton’s original was used. For this reason, Walton’s original music for the “Battle In the Air” sequence was used in the climactic closing of the film.

"I'll Be Dead Before You Break My Heart"